We were thrilled to be included in the annual Wine and Spirits Magazine Top 100 wines of the year issue. Check out the write up below. 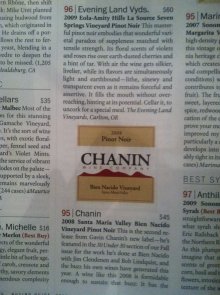 “This is the second release from Gavin Chanin’s new label—he’s featured in the 30 Under 30 section of our Fall issue for the work he’s done at Bien Nacido with Jim Clendenen and Bob Lindquist, and the buzz his own wines have generated this year. A wine like this 2008 is formidable enough to sustain that buzz: It has the breadth of a great California wine without being about fruit. Instead, it’s more about the tension in the flavors than the flavors themselves (part of that may be the cool season at Bien Nacido, where Chanin harvested in early September and achieved a fully ripe wine at 12.9 percent alcohol). This is succulent and mouthwatering, the texture rich, the flavors pointedly briny; there’s a stemmy character that calls out the acidity in the finish, suiting the wine to an oily fish like grilled mackerel, as well as to other, less extreme match ups.”